A multi-year restoration project is breathing new life into the Al. and Lou Ringling mansion in Baraboo, Wisconsin. Thanks to the efforts of Joe and Carmen Colossa, guests can once again marvel at the life of a once prominent family. 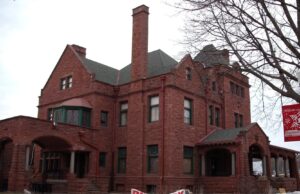 On a breezy but sunny spring day I stopped by the mansion for a tour. That tour and follow-up phone conversations provided greater insight into Al. Ringling’s home and the Ringling family. Joe Colossa’s encyclopedic knowledge of and genuine enthusiasm for anything Ringling made for a most enjoyable visit.

Construction of this beautiful home took 18 months and cost $100,000 (approximately $2.9 million in today’s dollars); it was completed in December 1906. Soon afterward, Al. and Lou Ringling threw open the doors and welcomed community members inside. “The Ringlings were really kind people,” Colossa says.

Technologically, the home was quite advanced for its time. The Ringlings took advantage of electricity — produced onsite by a generator — along with indoor plumbing. Each room has a working fireplace and original thermostat. Though the home had only one boiler, thermostats and radiators in every room allowed for zoned heating.

Designed in the Edwardian style by Minneapolis-based Kees & Colburn, the home looks and feels impressive but not overly so. It’s as if the Ringlings wanted to showcase their lifestyle but not flaunt it. Lake Superior sandstone gives the mansion its distinctive red color.

Al. Ringling died of Bright’s disease, a chronic liver condition, on Jan. 1, 1916. Soon afterward, Lou Ringling moved into another house they owned nearby.

Al’s brothers took possession of the mansion, but quickly gave it to their sister, Ida. Ida and her family lived in the home until 1927. That autumn, Ida was invited to move to Florida to be with her surviving brother, John Ringling. The home remained unoccupied and boarded up for nine years. It suffered occasional break-ins but the damage was minor.

The Baraboo Elks Lodge (#688) purchased the mansion in 1936. They added a ballroom, named for Lou Ringling, in 1948. They would remain owners for more than 75 years.

Ringling fans step in to save the landmark

By 2013, the mansion and ballroom were on the market. According to Colossa, a national pharmacy chain was interested in placing a store at that location. With the City of Baraboo not interested in acquiring the property, Joe and Carmen Colossa — both former employees of the Ringling Bros. Circus — reached out to a close friend, Don Horowitz.

A business owner from East Hampton, New York, Horowitz is a kindred spirit. In a phone interview from his home, the self-described “circus fan and circus hobbyist” says he loves history and old homes. Horowitz got an outside look at the home during a visit to Baraboo in the early 1990s. “And I sort of fell in love with the community,” he says. “I like the area.”

Touring offers a step back in time

Passing through the sturdy wood and glass front door, you are transported back to the early part of the 20th century, leaving behind the hustle and bustle of contemporary life.

Make no mistake: This is a big house, even by today’s standards. It features 25 rooms, including 10 bedrooms and 12 bathrooms. You’ll find seven fireplaces, 14 original chandeliers (with more added during restoration) and 67 original leaded glass windows. In addition to electricity, the home features indoor plumbing and combination electric/gas chandeliers.

The tour begins in the Ladies’ Parlor. Among the many treasures on display are Lou Ringling’s five gold-trimmed chairs. Though reupholstered, they feature the original design of the time. Those chairs are just part of the 2,000-plus Ringling artifacts the family has donated or lent to the mansion. “They’re sending us stuff all the time,” Colossa says. “The Ringling family’s been awesome.” 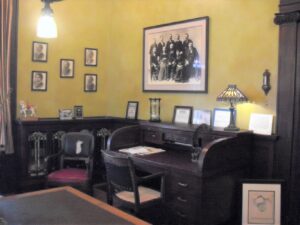 The library features an authentic a roll-top desk and chair owned by Charles Ringling. (Al’s desk is in a home in Montana. Colossa hopes to retrieve it one day.) The original chandeliers sport the dual electric/gas design. Numerous original leaded glass windows and an oil painting augment the period character.

This house is solid. Constructed of white oak stained dark brown, there is a sense of pride and accomplishment.

Much of the paneling on the first floor is quarter sawn white oak. Cutting old-growth wood in a quarter sawn fashion, Colossa explains, brings out the full detail of the wood. “You get quite beautiful patterns in them,” he says. “The older the tree, the bigger the trunk, the more beautiful the patterns are.”

Restoring the Dining Room to its Former Glory

Next is the dining room. A  1950s-style bar during its Elks days, this room has required the most work. A renovation costing $50,000 (and counting) will restore the room to near-original condition. Carpeting and much of the furniture was removed. But the room still has its original hutch, fireplace and Tiffany leaded glass bay windows.

Guests can marvel at the original 24 carat gold leaf ceiling, still intact in all its glory 115 years after it was installed. Colossa expects just minor cleanup from time to time.

Seeing the original gold leaf ceiling and leaded glass windows, you are amazed that those and all the other striking features survived all these years.

Recreated murals – one of which is based upon an original – adorn either end of the magnificent room. An authentic Chippendale table, owned by brother Alf T. Ringling, now occupies center stage.

Original pocket doors were removed by the Elks to install swing doors. A door stopper was removed during restoration requiring identical woo to patch the hole. But that would prove to be a blessing in disguise. More on that later.

Entering the billiards room, you’re struck by the wrap-around mural. The privately commissioned artwork depicts a bucolic Dutch countryside. Fitting, as the Ringlings had some Dutch in their blood, Colossa explains. This room also featured a 24 carat leaf ceiling; that has been painted over.

The Ringling brothers would entertain themselves playing 3-ball snooker on the pocket-less billiards table, owned by Henry Ringling. Three leather-wrapped pool cues, dating to the 1890s, stand ready for the next players.

Moving onward, the grand staircase takes you to the conservatory. A south-facing room, its bay windows afford ample sunshine for the herbs and spices the Ringlings used to grow. Plumbing in the room suggests a radiator was once located there. The conservatory could have been a three-season room, Colossa speculates.

Outside, you’ll climb a short staircase to the second floor. There, Colossa points out a “secret view.” No spoiler alert here. Suffice to say that Al. Ringling incorporated a hint of travel lore into his home.

The second floor is mostly sleeping quarters. Al’s old bedroom is fully restored and features a period four-poster bed. Close by is Lou’s bedroom, which contains her actual bed. 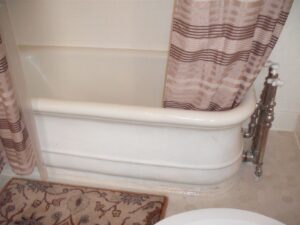 If you’re into antique fixtures, you’ll appreciate the built-in bathtub on the second floor. Crafted of china and sporting original fixtures, it still functions today. (Ask Joe to demonstrate the valves.) A showerhead and period style faucets (not visible here) were installed for today’s guests.

Treasure hunting isn’t limited to parks and beaches. Recall the floor boards near the dining room that needed replacing. Colossa knew exactly where to look: just outside an upstairs closet. Pulling up some flooring, he made an amazing discovery. Hidden in the floor joists was a time capsule left by the Ringlings. Among the trinkets was a sheet of paper listing the recipe for their favorite beer.

That’s when the light bulb went on. “We should open a brewery,” he thought.

For Don Horowitz, leveraging the recipe into a microbrewery just made sense. “This is the perfect thing,” he recalls thinking. “Let’s do this.”

And they had the perfect location: the adjacent ballroom. Up to that point, the ballroom had been used for some weddings and other events, Horowitz says. Today, Al. Ringling Brewing Co. offers the Ringling Family Original beer along with about a dozen specialty beers brewed onsite.

Just think: If the Elks Club hadn’t replaced the pocket doors with swing doors, Colossa wouldn’t have to go scrounging for replacement floor planks. “Because of that, we opened the brewery,” he says.

As Horowitz adds fondly, “We’re brewing the man’s beer basically at the man’s home. And that’s a really exciting thing about the brewery.” The microbrewery opened on Sept. 25, 2020.

Incidentally, I sampled the Ringling Family Original during my visit. It’s quite good. The beer is light and crisp with a note of citrus, though there is no citrus in it.

Along with the purchase price of $250,000, Colossa and his team negotiated another $30,000 for certain Ringling property like oil paintings and furniture.

Colossa estimates they’ve spent about $1 million on restoration on the mansion and an equal amount converting the ballroom into a microbrewery. Bringing the mansion up to code meant new electrical and plumbing; they also replaced the furnace within the past year.

“We probably still have about $250,000 to go on the brewery and about another million to go on the property,” he predicts. Big-ticket items include replacing the terra cotta roof on the mansion and paving a new parking lot in back.

“When you’re dealing with a building this size, it adds up quick,” Colossa says.

The project is funded by loans, financial commitments from business partner Don Horowitz, and income generated from tours. The inn, once operational, is expected to become another important source of revenue.

Preparing the Ringling Mansion for its Next Phase

Colossa predicts they’ll be “caught up” with the restoration in four to five years, but they’re already fixing portions first addressed several years ago. As an example, he points to masonry work. “We going to have masons working on this house till the end of time. That’s a constant thing,” Colossa says.

The Colossa family, which includes JoeJoe, 5, and Perla, 3, resides in a restored room on the third floor.

Meantime, their sights are set on opening an inn. A total of five bedrooms will be available for rent. Guests will have access to the dining room (for breakfast and as an office), and the upstairs parlor for lounging. To protect the historic pieces, the Ladies Parlor, library and billiards room will be off limits.

Occasionally, though, thoughtful citizens step forward to save those old gems. Such is the case with the Al. Ringling Mansion in Baraboo.

“What we’re trying to do is keep the legacy of the Ringling family alive,” Colossa explains. “[To tell] their story, so it never gets forgotten.”

For business partner Don Horowitz, the project resonates on both personal and professional levels.

Co-owner of a floral business in East Hampton, Horowitz, 66, is looking ahead to retirement. He will move to Baraboo so he can help run the mansion. The money he has committed is “for the future for the community and for the history of the Ringlings,” he says.

Horowitz hopes the Al. Ringling Mansion will help tell the Ringling story. “Touring the mansion, you can learn about the home as well as the man,” he says. “I’m excited that this project will keep Al. Ringling’s legacy alive for future generations.”

Due to the hard work and commitment of Joe and Carmen Colossa, along with Don Horowitz, visitors can experience a fascinating slice of life from a bygone era. And Baraboo keeps a rich part of its history.

Al. Ringling Mansion is located at 623 Broadway St., Baraboo, Wisconsin. Guided tours are offered April through October. Tours run on the hour from 11 a.m. to 3 p.m. Wednesday to Sunday. Tickets are $20 for adults ($18 for seniors 65 and older, as well as active duty service members and veterans) and $5 for children. To learn more, visit www.alringlingmansion.com.

Al. Ringling Brewing Co. is open Tuesday through Sunday. In addition to specialty beers, the brew pub features a menu with an international flair. More information is available on their website.

Feel free to comment below. And if you found value in this post, please share it with others. You may use any of the buttons on this page. To contact me, send a message to the email address below. 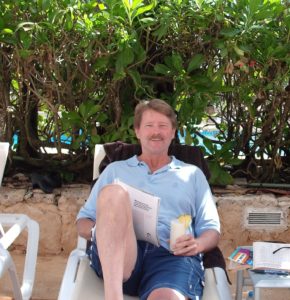