I was bushed; my legs and feet were tired. The first t-shirt was soaked through; the outer one partially so. A hot shower and a cold drink would’ve hit the spot nicely. But I felt good. I just spent several hours hiking through Starved Rock State Park.

Hugging the Illinois River and covering 2,630 acres, Starved Rock State Park is one of Illinois’ more popular state parks. Its 13 miles of trails, numerous waterfalls, and captivating views attracted more than two million visitors in 2018, according to the park’s website.

I arrived a little after 10 a.m. That first day of May 2019 dawned cloudy and cool but dry. The upper Midwest experienced a very wet spring. Many waterways were at or near flood stage and localized flooding was common. Starved Rock State Park wasn’t spared.

The main parking area was under water, so visitors were directed to the overflow lot on the high ground. Changing to my hiking boots, I headed to the visitors’ center for a trail map. 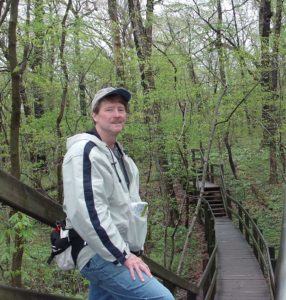 Map in hand, I set off a little before 10:30. I didn’t really have a goal in mind, other than to see how far east I could get by roughly noon. The first 200-300 yards, as you can see in the image, is boardwalk with railings. I encountered some boardwalk again in the afternoon, but the trail is otherwise natural.

The forest is mostly hardwoods, including elm, white oak and black cherry, Once off the boardwalk the trail turned sloppy.

Because it had rained so much, I wore work boots (deep tread) and a windbreaker. (Also packed a water bottle and some treats. Planned to be out for a while.) I came across several groups of youth along the way. Nice to see young people being introduced to the outdoors. But for the most part, they weren’t dressed for it: t-shirts, athletic shoes, and even one pair of shorts was spotted. What were parents thinking?

Other than a single bird chirping, the woods were quiet. At times you could hear faint vehicle traffic from across the Illinois River. Except for the occasional groups I encountered, I had the trails to my self. But this was a weekday. 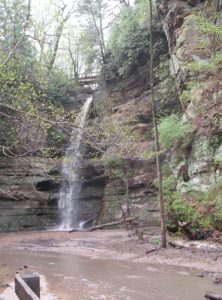 My first stop was Wildcat Canyon, 1 mile in. Though you’re not in the mountains, this hilly terrain offers its own canyons. Most have waterfalls, which can be impressive. Such was the case at Wildcat Canyon. For this image I took the staircase to ground level.

Visitors are rewarded with incredible views of the sandstone bluffs around here. Water rushed through when glacier melted some 16,000 years ago, gouging out the layered sandstone.

Most of the trail from then on is dirt (muddy this day). It’s easy walking, but be careful of the exposed tree roots.

As the trail winds east it takes you past interesting lookouts. Step out for a look over the Illinois River, but be careful. The lookouts points are soft sand with no guardrails or fences. 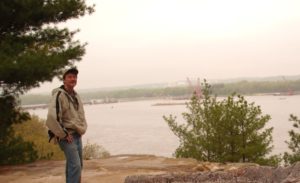 One very nice lookout is Sandstone Point Overlook. You get a commanding view of the river and part of neighboring North Utica. According to the trail map, Sandstone Point is 1.3 miles in.

As you can see there wasn’t much activity on the river at that moment. I did hear a train horn coming from North Utica, but otherwise it was quiet.

Cool weather helped with the hike. As with all outdoors activities, you’ll want to prepare properly. I sipped water on occasion but found the single water bottle sufficient that day.

Soon after I encountered my first closed trail. “Restricted Area” the sign on the gate said. Don’t know why, but I presume the trail was washed out ahead. A nearby staircase took me down to the aptly named River Trail.

As I neared ground level, a breeze hits, bringing with it that distinctive lake smell from the Illinois River. It reminded me of boating and fishing on Wisconsin’s waterways as a kid.

Helpful markers throughout the park keep your bearings straight. Red plastic sign posts are labeled “Away” while outbound and “Return” on the other side. Additionally, trees are marked in yellow on the outbound side and white on return side.

The River Trail is was in good shape, though watch for exposed tree roots. It was sandy with occasional puddles.

By noon I figured I’d better turn around and head back for lunch. Reviewing that map, I guessed I was near Hidden Canyon. If so, I was approximately 2 miles in. (Would be nice to have more signs on the trail.)

The morning was shaping up to be a fine one, and this hike put me in good spirits. As if to concur, Mother Nature brought out some sunshine.

After a lunch of sandwich and soda, it was time for second leg of the journey. The western trail takes visitors to St. Louis Canyon, the best canyon I saw. At 1.5 miles away, it takes a little while to get there. But the hike is worth it.

I followed the map, which took me in a counterclockwise loop behind the main complex. Within in minutes I arrived at French Canyon. An impressive view, but Very steep gorge with a sheer drop off. Be careful.

Soon afterward, I ended up at ground level near main entrance to the park. I had to get back to high ground for the trail to St. Louis Canyon. Ahead lay one of the taller staircases I’ve encountered in a park: 150 steps that will give you an endurance workout.

I learned an important lesson from that jaunt. To get to the trail to St. Louis Canyon, start in the parking lot and walk left (north). Look for a wooden sign near a foot bridge over the main road. That foot bridge is the trail head.

Hikers will encounter some dips and climbs on the trail, but otherwise easy  going. You’ll also use a few staircases, but nothing like the monster behind the visitors’ center.  Trail is mostly sand or dirt, with a short patch of boardwalk. Watch for tree roots in sandy parts.

I arrived at St. Louis Canyon a little after 2 p.m. It’s very impressive at ground level. You’re surrounded on three sides by tall, sheer sandstone walls. You feel as if you’re some natural amphitheater setting.

I was told St. Louis Canyon has an impressive waterfall. I couldn’t see (or hear) one from my perspective. I gather it was around the bend in the bluff in front of me.

I didn’t mind. St. Louis Canyon is one of those locations that begs you to stop and meditate. So I did.

Starved Rock State Park is located in LaSalle County, in north central Illinois. Larger communities nearby include Rockford to the northwest and Chicago (and its southwestern suburbs) to the northeast.

Feel free to comment below. And if you found value in this post, please share it with others. You may use any of the buttons on this page. To contact me, send a message to the email address below.