Kayaking on the Kickapoo River a relaxing experience 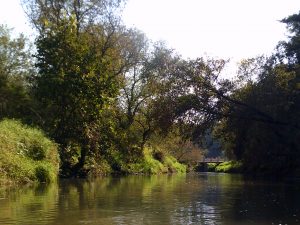 Vacationers often envision jetting off to some exotic or distant location to escape. Nothing against that, but too often travelers overlook fine destinations nearly in their backyards. I recently took a short kayak trip down the Kickapoo River in southwest Wisconsin. It proved to be a great way to spend nearly three hours one recent Saturday. And it’s not too far from home.

The Kickapoo, named partially for the Indian tribe that used to inhabit the southwestern part of Wisconsin, winds its way for 125 scenic miles. It cuts through all or parts of four counties before meeting the Wisconsin River in Wauzeka, Wis. I started my journey in Ontario, Wis. (Yes, we have an Ontario!). Adjacent to the 3,600-acre Wildcat Mountain State Park, Ontario is a popular spot for launching a canoe or kayak. I chose to rent a kayak from Drifty’s Canoe Rental, one of three such businesses in tiny (population 554) Ontario.

It was a beautiful September Saturday. Sunny and warm (about 80 degrees) with just a few clouds in the sky. The kayak adventure — my first on the Kickapoo — coincided with a visit to the family cabin. Our cabin sits on 42 acres of land about 30 minutes from Ontario.

Shoving off at about 11 a.m., I was quickly enveloped in a shady part of the river. In fact, probably close to have of my 2.5-hour journey was in shade. That suited me just fine, as the sun can be tough on a day like that. (More on that in a bit.)

The Kickapoo was relatively calm with water levels around 6 inches in parts. In fact, I beached it a couple times, getting caught off guard in deceptively low water. One canoeist, writing after his trip in June 2004, rated the river as intermediate level. He traveled much farther than I did and under river conditions that may have been different.This was just my fifth or sixth kayaking experience and the first on a river. I found the Kickapoo quite manageable that day. 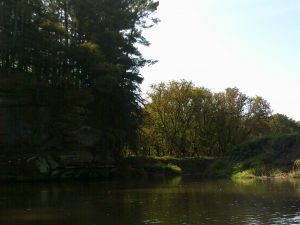 Much of the route is tree lined, and you get a glimpse of the sandstone ridges so predominant in southwestern Wisconsin. This area is called the Driftless Region, because it was spared the immense actions of the most recent glacial activity. The result is rolling, wooded hills and countless meandering streams and rivers.

The Kickapoo is very popular with kayakers and canoeists. (Other popular Wisconsin waterways include the Wolf River and the Wisconsin River.) Like most rivers, the Kickapoo offers its share of twists and turns. Indeed, the word Kickapoo, derived from Native language, means “one who goes there, then here.” The water was very slow-moving that day. If you wanted — and I did at times — you could just sit back and relax. Average speed was probably around 2 mph. Occasionally I would drift toward one side, easily corrected by dipping an oar in the river. 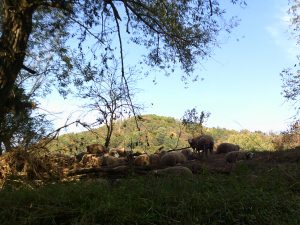 I had the river pretty much to myself. I passed an occasional couple or small group that had pulled up on the bank for a beer and rest. Not quite sure how long it would take to get to my destination, Bridge 5, I kept steady pace. (But I also coasted at times.) I had hoped to spot a bald eagle, but today was not to be Oh, I stumbled upon these guys along the way. They seemed pretty content to enjoy their shaded rest.

Throughout my journey, which included a stop at a landing, I encountered 25-30 boaters. Most were using kayaks, but there was a sprinkling of canoes as well. One in particular was a beauty, Crafted of at varying shades of hardwood, it appeared to be hand made. I didn’t have the chance to talk with its owner. I’ll bet he or she was really proud to take that canoe on the water.

Some of the other boaters were definitely experienced. You could see it in the style of kayak and how they rowed. I’m sure some of those folks have been on more challenging waterways. But I’ll bet they still enjoyed their time on the Kickapoo.

As I paddled along, a number of ideas and suggestions about kayaking came to mind. (They apply to canoeing, as well, of course.) In no particular order I offer these to help make your next trip on the water comfortable and pleasurable.

Wide-brimmed hat: A must, any time you’re in the sun. Ditto for sunglasses. While parts of this trip were in shade, you’re also going to spend a lot of time in the sun. Experts recommend applying sunscreen, too. I didn’t, but I can see the value in that.

Drinking water: I suggest at least one bottle for every two hours of boating. (Some folks augment with the brewed variety. Always be careful when mixing alcohol and boating.) I drank at least a pint in 2.5 hours. Canoeing and kayaking are deceptively demanding. You will build up a thirst.

Food: I highly recommend taking along a sandwich or snack bars. In addition to thirst, hunger will set in. You are exercising, after all. My small soft-side cooler held a sandwich and some cookies. That was enough for my journey.

Camera: Of course, the item should be water-proof or water-resistant. Mine was. In addition, I kept it in a small zippered pouch attached by a lanyard. Cameras and other valuables are, well, valuable. That brings me to….

Dealing with valuables: The owners of Drifty’s recommend you leave keys, wallets, cameras and other valuables behind. They were nice enough to store my keys and wallet in a locker at the main building. Don’t take anything with you that you can’t afford to lose or have damaged.

Notepad: Here is where I dropped the ball. I brought along a stenographer’s-style notepad and pen. Somehow they fell out of the kayak near the beginning. Not sure how, but I went the entire trip unable to record any notes. What you read here is based entirely on memory. Even so, a notepad is made of paper. One wonders how it would’ve help up to the conditions. It’s something I’ll have to think about should I take a similar trip again.

Life jacket: Wisconsin law requires that the rental firms provide a life jacket. I wore it, even though the water was never deep. It’s a habit I got into years ago: wear a life jacket when boating. Not everyone I encountered shared my view, but that’s OK.

Shoes: Synthetic material is preferred, due to the wet environment. I wore Crocs that day. They’re fairly comfortable, and I especially like them by the pools and on beaches. They’re designed to be slip-ons, which means they slip off just as easily. I briefly lost one at the end of my excursion. Luckily they float. Next time I’ll wear laced shoes.

My kayaking adventure exposed me to only a few miles of the Kickapoo River. But what I saw convinced me to go back. It’s a great way to spend an afternoon and it’s not too far away.

I imagine you’ve done some kayaking or canoeing. Where and when did you hit the water? Care to talk about it? Feel free to comment below. And if you found value in this post, please share it with others. You may use any of the buttons on this page. To contact me, send a message to the email address below.