You’ve probably heard the old saying, “George Washington slept here.” While rarely true, some hotels and rooming houses try to play off the popularity of this nation’s first president. The point being that sometimes it’s a small connection offers a chance at fame. Or at least a few tourists.

On first glance, the Gettysburg train station almost fits that bill. Its main draw is that it played a part in one famous president’s most famous moment in history. But there is more to this building, as I learned during a recent visit.

As a light rain fell over Gettysburg one Saturday afternoon, I stepped inside for a look. I have visited Gettysburg numerous times, but this was my first visit to the train station, located on Carlisle Street a block north of the square. 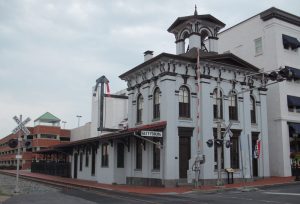 Greeting me was Bonnie, a very knowledgeable and enthusiastic staffer. Over the next 90 minutes or so, I gained a better understanding of the rich history behind this building.

Plans for a train serving Gettysburg began to surface in 1838. A handful of local leaders secured a charter for the Gettysburg Railroad Company in March 1851. The train originally was to run west, Bonnie said, but planners ran into logistical and financial issues as they began cutting the trail. (That trail, incidentally, played a role in the beginning of the Battle of Gettysburg, July 1, 1863.)

In February 1858, ground was broken for tracks that would offer passenger service between Hanover Junction and New Oxford, Pa. Later in the year the line was extended west from Hanover Junction and terminated at Gettysburg. On Dec. 16, representatives of the Hanover Branch Railroad, which controlled the railroad at the time, met in Gettysburg to celebrate opening of the new line.

Meantime, construction was underway on a train station. Plans called for building a passenger station, engine house and freight station. Cost for building the train station was estimated at $2,070 (more than $58,000 in today’s dollars).

Contractors (and brothers) John and Valentine Warner were engaged to build the new train station. Designed in the Italianate style popular in the mid to late 1800s, it features arched windows, a square cupola (tower), and decorative brackets under the overhanging eaves.

According to Bonnie, the ticket office and waiting rooms–split by gender–were downstairs. (A display further explains that the genders were separated “to protect the sensibilities of women and children.”) A spiral staircase near the middle of the room lead to offices upstairs.

Gettysburg being the end of the line, the depot was designated a head house. The tracks terminated on the east side of the station where the platform original was. Another, smaller section of track ran straight east from the station. That piece of track was built with a slight upward pitch to the back.

Upon arrival, the train would back up onto that short section. The locomotive would unhitch and head for the nearby wheelhouse to be turned around. Meantime, the cars would roll gently into the train station. Later, the locomotive would hitch onto the last car for the ride back.

Construction of the train station was completed by May 1859 and ticket sales began. 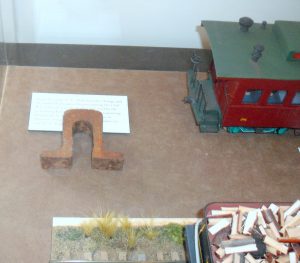 Rail lines into Gettysburg were built of U-rail, one of several styles used in the early 1800s. That distinctive U-shape was its weak spot, literally. Hollow, the track couldn’t support the heavier locomotives and trains that would come later. This type of track, a portion of which is shown at right, was used for about 10 years. (This piece was cut from a section of track near Brandy Station, Va. No portion from the Gettysburg line is known to exist.) The U-rail eventually gave way to the sturdier (and solid) T-rail used today.

Gettysburg’s introduction to the Civil War, one could argue, actually occurred on June 26, 1863. That’s when Confederate troops burned the railroad bridge at Hanover Junction, cutting off supplies to Gettysburg. The War Department stepped in on July 11. After repairing the bridge, the Department coordinated a relief effort that brought in supplies, family members and coffins. Departing trains left with casualties; estimates are that as many as 15,000 wounded were evacuated in the following months.

During the war, the train station was pressed into service as a Union field hospital. Able-bodied wounded often would hang out in the bell tower. There they they had a commanding view of the battles, including Pickett’s Charge.

Lincoln arrived late on the afternoon of Nov. 18, 1863. He was greeted by David Mills and hundreds of eager residents. Mills, a local attorney, was instrumental in creating the Soldiers’ National Cemetery (now called the Gettysburg National Cemetery). Lincoln stayed at Mills’ house that evening. It is there Lincoln put the finishing touches on his remarks.

Soon after the dedication ceremony, on the afternoon of Nov. 19, Lincoln attended an event at the Presbyterian Church in town. He boarded the train in the early evening, and headed east.

Bonnie is an encyclopedia of fascinating stories about the train station and Lincoln’s trip from Washington. I will share one here.

Lincoln had been receiving death threats for sometime; any travel outside of Washington could be perilous. Upon returning to Hanover Junction on Nov. 19, where he had to disembark for another train, Lincoln felt compelled to show his gratitude to the train engineer, John Eckert.

Presenting him a gift of a pocket watch, Lincoln said, “Mr. Conductor, I thank you for returning us safely. May God bless you. May you live long and prosper.” Legend has it that this is where Gene Roddenberry got the famous line used by Mr. Spock in the “Star Trek” series.

A general economic slump after the Civil War hit Gettysburg Railroad Company hard. The line went through several owners before being snapped up by Western Maryland Railway in 1895. In 1886, one-story addition was added to accommodate a new ticket and operator’s office, an enlarged ladies meeting room, and a baggage room.

Interest in the battlefields after the Civil War spawned a jump in passenger traffic. This lasted until the time of World War I. Afterward, visitors increasingly used the automobile to visit. By late 1942, there was insufficient passenger traffic to warrant keeping the line going. The Gettysburg’s passenger service rode into history on Dec. 31. 1942, as train #44 made its final journey to Baltimore.

The train station saw little use afterward. In 1955, Western Maryland Railway loaned the building to the Gettysburg Travel Council, which ran a visitor center there for nearly 50 years. The building, however, deteriorated over time. Gettysburg took title of the building in 1998 after concerned citizens raised alarm over its condition. Starting in 2002, the Train Station Committee began an extensive historical, architectural and archeological review of the building. Restoration began in 2005 and was completed in spring 2006. You can see the results today. It is quite stunning.

Train stations reflected the colors of the railways that owned them, Bonnie said. At the time of restoration, the building was orange with green trim, the colors of the Western Maryland Railroad. A local researcher, Dr. William Aldrich, scraped down to the original layer of paint. He used emission spectography to determine the building’s original colors, and commissioned Sherwin-Williams to produce the paint.

Inside, you see brightly painted walls and beautiful hardwood floors. The main room contains an accurate scale model of the original train station. Displays include a diorama of the train station circa 1860, plus the telegrapher’s logbook and a piece of railroad tie used in switching the tracks. A curved piece of inlaid wood shows where a spiral staircase once stood.

The center room is used as a visitors center and small gift shop. You can purchase train-related merchandise for adults and children. They also carry books related to the Underground Railroad. (Of which another of Gettysburg’s historical buildings, the Dobbin House, played a part.)

Large posters in the back room (east side) chronicle the rich history of Gettysburg’s railroad station.

Even though few artifacts remain and the train station has been remodeled over time, it still evokes the feeling of that bygone era. Walking through the beautifully restored building, you’re glad that concerned citizens came forth to ensure its next life as a museum and visitors center. It is open most months of the year, and admission is free.

While the battlefields will naturally draw your attention, you should spend a few moments inside Gettysburg’s railroad station. The station played a significant role in Gettysburg’s history–much beyond President Lincoln’s brief visit.

What are your fondest memories of visiting Gettysburg? Feel free to comment below. And if you found value in this post, please share it with others. You may use any of the buttons at left.