The House on the Rock interesting; worth second visit

July 16, 2017August 8, 2017 Tom FuszardEastern United StatesAlex Jordan Jr., House on the Rock, things to do in Wisconsin, what to do in Spring Green, Wisconsin attractions0 Comments

Have you ever yearned to visit place only to discover that reality didn’t meet expectations? In a way, that was my feeling about a recent visit to The House on the Rock. The venerable (some might say garish) tourist destination in southern Wisconsin has held my interest for years. Decades, actually.

“Weird,” “strange,” and “visual overload,” are just some of the terms I’ve heard to describe Alex Jordan’s creation in rural Iowa County. It has held near mystic status with me; I had to experience The House on the Rock for myself. So, I did.

And, quite frankly, I came away a bit underwhelmed. Not because the collectibles, doodads, musical instruments and other stuff Jordan put on display aren’t awe-inspiring. I’m sure most are. I merely missed the bulk of the collection.

In the interest of time (and, yes, saving money), I chose the shorter of the self-guided tours. Section 1 for $14.95 provides access to the original buildings. For $24.95 per person, you can tour the entire grounds. Included are two buildings showcasing the vast majority of memorabilia that, well, makes The House on the Rock memorable. More on the tours in a bit.

I visited on a Thursday in late June. Arriving about 2:00, I saw perhaps a dozen other vehicles in the parking lot. That was encouraging as I didn’t care to fight the crowds In fact, I met very few other visitors during my two-plus hours there.

After purchasing your ticket, you enter the Alex Jordan Center. Here they chronicle Jordan’s life and passion. You can sit in on a 5-minute video, and immerse yourself in the displays. I highly recommend you spend time here. It’s a good way to understand the man and his mission. Due to my own curiosity and desire to write this column, I devoted about 30 minutes to this room. Thirty minutes proved barely enough time, but I needed to get going.

Jordan’s dream for Deer Shelter Rock took flight in 1946. A Madison native, Jordan fell in love with the rolling hills and countryside near Spring Green, Wisconsin. He was especially intrigued by the unusual rock outcroppings, Deer Shelter Rock in particular. Jordan used to picnic at the base of the rock, and eventually bought the surrounding 240 acres so he could begin building his dream. He continued working on its various projects nearly up until his death in 1989. Jordan sold the property and business to friend and business partner Art Donaldson in 1988. The Donaldson family has expanded the campus and added some displays but otherwise holds true to Jordan’s vision. 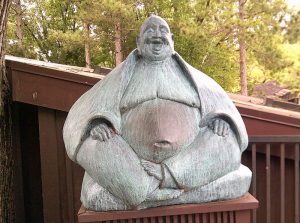 One door in the Jordan Center leads to the Sculpture Room. Actually a small courtyard, it offers a modest collection of Asian works and a nice view of the Japanese Garden below.

On prominent display is this fellow, named Hotei. The attached sign reads

God of Happiness
Rub His Belly
For Good Luck

So I did. I’m still waiting for my fortunes to change. (According to Japanese mythology, Hotei is one of the Seven Gods of Luck.)

Back into the Center and out another door you head down a hallway for the first attraction, the Gate House. Entering, you feel as if you’ve entered someone’s home. In a way you have, though Jordan and his long-time love, Jennie Olson, lived in Madison. With no one else around it was quiet, save for some eerie music playing. You take in the massive stone fireplace–a Jordan favorite–while relaxing on the couch. It feels like a living room, but then again not.

In the background is one of Jordan’s handmade “orchestra” contraptions. Called the Gate House Ensemble, it’s comprised of a piano, harp, two violins and a couple other instruments. The ensemble continuously plays Ravel’s “Bolero.” While I don’t know much about classical music, the piece just seems to fit right in.

The Gate House includes a full kitchen. You can almost imagine Jordan and Olson preparing a meal while admiring the Japanese Garden below. Watch your head while walking through. Though Jordan was 6’2″, he built this section with low ceilings.

Walking through, it feels as if you’ve stepped into an episode of “The Twilight Zone.” The home is fully furnished but the family has mysteriously disappeared. A musty smell lingering throughout just adds to the atmosphere.

Outside the Gate House, a covered foot bridge takes you to the House on the Rook and adjacent Infinity Room. Built in 1985, the Infinity Room is 218 feet long, of which 140 feet stretch out over open space. It provides an impressive view of the forests and fields nearby. Decked out with more than 3,200 windows–thankfully, several had screens to allow the cool breeze in–and a carpeted floor, walking on this deck is not frightening at all.

Afterward, you step into the actual House on the Rock. Other than an exposed wall dripping its own natural spring, there’s no indication you’re up against a protruding rock formation (Deer Shelter Rock). Here we see more evidence of a dwelling, though more for entertaining and study. Along one wall are hundreds of books–some appear to be quite old–in a book case that reaches two stories high. A very inviting couch welcomes you in another room. Tiffany-style lamps and a fancy coffee table add warmth to the room. But, again, there’s that eerie sense of people not here who should be.

Continuing your journey, you take a short flight of stairs to the roof. As is the case from the Infinity Room, whose metal roof stretches out before you, you get a pretty good view of the countryside up there.

Jordan typically worked on the fly. As we learn in the Alex Jordan Center, “The plans for Alex’s creations at the House on the Rock were never written down–Alex carried them around in his imagination.” Interestingly, while the two original buildings have a certain Frank Lloyd Wright feel to them–they’re built partially of flagstone and are incorporated into the environment–Jordan offers no credit to the famed architect. Wright’s northern home, Taliesin, is less than six miles away. It’s hard to believe Jordan wasn’t influenced by the master. 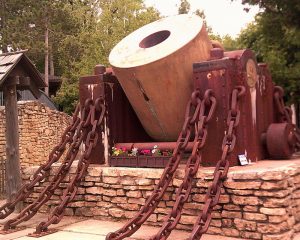 The grounds are sprinkled with various types or artwork and artifacts. One such collectible is this mammoth piece from the Civil War. Named the “Dictator,” the 13-inch mortar, formerly used to lob 200-lb. explosive ordnance upon Confederate positions, now sits quietly by the exit. Perhaps, one wonders, to symbolically send you out with a bang.

If you decide to visit, be sure to budget enough time. They suggest at least one hour for Section 1 and two hours for the complete tour. Though self-guided, you’re likely to spend even more time than that. I spent more than two hours in Section 1; I imagine the full tour would take close to four hours. Closing time is 5 p.m. daily. Ticket sales stop at 4 p.m. for Section 1 and 3 p.m. for the full tour. Plan your visit accordingly.

My visit was enlightening, but unfulfilling. Other than two “ensembles” (the other one at the Infinity Room), there was nothing really out of ordinary. The “bling,” as it were, is included with the full tour. The other buildings showcase the carousel, huge organ and other collectibles for which the House on the Rock is so well known. Those will have to wait until my next visit.

If you have visited The House on the Rock and wish to share your thoughts, feel free to leave a comment. And if you found value in this post, please share it with others. You may use the buttons at left.. To contact me, send an email.